The Ebola outbreak, which has spread from Guinea to Liberia, Sierra Leone and Nigeria, has killed at least 1,145.

The World Health Organization (WHO) has called for exit screenings on all travellers from affected countries. Thermal imaging has been introduced to detect elevated body temperatures  which can diagnose high fever a common symptom of the Ebola Virus.

–          FLIR A320 Tempscreen  320×240 resolution designed to deliver accurate Thermographic imaging and repeatable temperature measurements in a wide range of automation applications with a thermal sensitivity of 50mK at 30°C.

(This thermal imaging camera was specifically designed to detect elevated body temperature and was introduces when the swine flu epidemic was at its height). 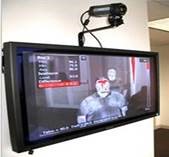