Purchase a Flir E8, Exx or T Series Thermal Imaging camera and get … 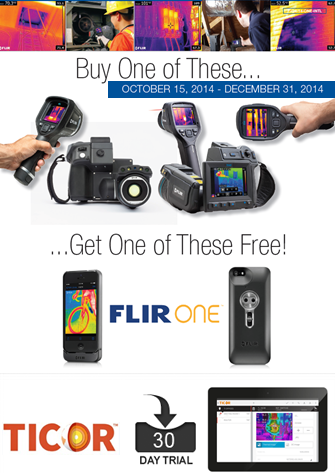 With the ability to see what the naked eye can’t, FLIR ONE™provides a thermal image of minute temperature differences, giving users the power to see in the dark, observe invisible heat sources, compare relative temperatures and see through light fog and smoke. · FLIR ONE for iPhone5 and 5s fits on the phone like a protective case, displays a live thermal image of the world around you right on the phone’s screen and captures still images and videos. · FLIR ONE uses both a Lepton™ thermal camera and a standard camera. Combined together with FLIR’s patented MSX® technology, FLIR ONE provides enhanced thermal images with sharp detail. Created to enhance the FLIR ONE device experience, the FLIR ONE App, available on the Apple App Store for free provides a simple and intuitive user interface with a variety of functions that make it easy to collect and share compelling and useful thermal images. It can load captured images directly to the camera roll and allows users to easily share on Facebook, Twitter, Instagram and other social media channels, among many other features. · FLIR ONE houses its own battery source that can power the device for approximately four hours of continuous use.

NEW THERMAL IMAGING SOFTWARE DELIVERS INSTANT REPORTING AT JUST ONE CLICK! Two new software packages which cut thermal imaging engineers’ survey/reporting time by 25% by streamlining the data capture, input and analysis procedures associated with thermal imaging report generation and maintenance monitoring,  have been developed by thermographic services specialist,  Ti Thermal Imaging Ltd. TICOR™is believed to be the first Android-based thermal imaging reporting application which provides immediate one click report generation. Installing the software on an android tablet enables engineers to enter data from a thermal imaging camera directly into the tablet and produce instant diagnostic reports while they are still on site with just one click at the end of each TI survey. The TICOR™ software can also be integrated into WEBCOR™ – Ti Thermal Imaging’s new online predictive maintenance and condition monitoring programme – and, again with just one click, the data captured on TICOR™ can be uploaded onto WEBCOR™to provide data comparison and tracking of any changes to give early indication of potential issues or problem areas. Both software programmes are compatible with any thermal imaging cameras that produce images in various formats as well as the recently-launched Seek Thermal camera attachment for mobile phones.   They provide a particularly efficient solution for monitoring and managing thermal imaging information for multi-site operations. Key Features

The software packages are the brainchild  of Richard Wallace,  Managing Director of Ti Thermal Imagingwhich has over 12 years’ thermographic surveying experience, and were born out of his frustration at the length of time engineers have to spend manually copying data to produce a report after a site visit. Wallace says:  “Engineers currently spend around an hour for each three hours of surveying, manually transferring data from TI cameras and cross-referencing and matching it with the images, and I thought there had to be a more efficient way of producing reports.  We looked at what was available on the market and none of the software we found did what we wanted it to do.  We’ve worked with a software specialist to create the TICOR™ and WEBCOR™ programmes so that engineers aren’t spending another two hours producing reports at the end of a six hour survey.” Wallace adds:  “Thermal imaging is so extensively used throughout the manufacturing industry from line management – for example, monitoring control panels, roller bearings and motors –  through to distribution (eg; LV switchboards, electrical panels and distribution boards) that TICOR™ and WEBCOR™ will provide engineers with a cost-effective, time-efficient method of capturing and reporting data instantly and facilitating condition monitoring and predictive maintenance on an on-going basis.”